Cooperations National
Created by Isabelle Guggenheim
On November 11, the Swiss Federation of the Blind and Visually Impaired (SFB) celebrated its 111th anniversary in Solothurn.

The oldest national self-help organization in the visually impaired sector is committed to ensuring that people with visual impairments can participate autonomously and equally in social life.

Since 2017, Lions Switzerland - Liechtenstein has been actively supporting SFB: As a result, projects such as the haptic model of the Federal Palace or the White Cane Day on the Bundesplatz in Bern could be realized. Another project, namely the haptic model of the UN in Geneva, will be implemented next year when the Lions celebrate their 75th anniversary.

111 years ago, the National Federation of the Blind, later renamed the Swiss Federation of the Blind and Visually Impaired (SFB), was founded in Lausanne. At that time, blind persons recognized for the first time the need to unite in order to defend themselves against possible dangers and patronizing tendencies.

Networking with each other and equal involvement in all areas of society have been the guiding purposes of the association from the beginning. Today, SFB is the largest national self-help organization in the visually impaired community. As a member-based organization, it is represented by 16 sections in all parts of the country. The SFB offers those affected concrete support in everyday life through counseling centers, education and meeting centers or courses. In addition, it lobbies the business and political communities for the removal of barriers and full autonomous access for people with visual impairments. Current examples are the demands for independent political participation (e-voting) and barrier-free usability of digital services. 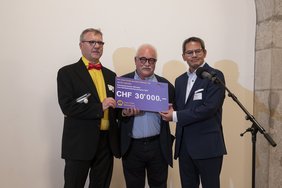